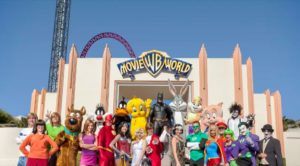 …..There’s scantily clad gymnasts as well. Seriously though, the Gold Coast entertainment scene has a lot to offer with a strong representation of international roving performers including acrobatics, fire breathers, aerialists with international acclaim and incredible stunt performers, all living and working in the region.

Hollywood on the Gold Coast

Much of this talent is fostered at the world-renowned Warner Bros. Movie World, which plays home to the country’s best-known program of international stunt performances and roving shows. Not to mention, it’s also a world class film studio, which has played host to blockbusters such as Pirates of the Caribbean, Aquaman, Thor Ragnarok, and San Andreas to name a few.

Entertainers from around the world

The entertainment scene on the Gold Coast is constantly changing.  International performers pass through year round, attracted to the surf, sun and sand. The lure of the beach lifestyle is so strong for some that they stay to hone their craft. This fantastic pool of eclectic talent from around the world makes it an event organiser’s dream. Onstage Entertainment don’t just pick from the bunch, we develop these newcomers to the scene.  This supports them to perfect acts that are both ‘corporate’ suitable and also unique and exciting. And with many international venue brands in the region, there’s plenty of space to have a party!

Check out Destination Gold Coast for just a few venue options on offer.  In the past, Gold Coast entertainment has suffered a reputation for being “baseline saucy”, with a strong emphasis on short shorts and gyrating hip hop dancers, (don’t get me wrong – they’re still here!) But Onstage specialise in developing unique artists with highly honed performance skills, dressed appropriately and created specifically for each event to ensure brand messages and quality skilled performers are positioned perfectly for each client.
Unless of course you want stripper poles and hip hop…. we can do that too!